Merging blogs into one

Many of you has followed me on some of my blogs like Love M.E.S.S., Love M.A.M.E., Love M.E.G.S., RCA Studio II Database and especially, OdySim: The Magnavox ODYssey SIMulator blog.

As time passes, i sometime don't post for a short but more for a long time (2 to 6 months) and since there is not much anything going with the RCA Studio II (and Chip-8), i finally decided to merge all the blogs into one accept the OdySim blog. Maybe in the future the OdySim might be merged with this one but who knows..?!

So bookmark this one and delete the old ones, and watch from time to time for new posts! :)

I have finished scanning all my Hanimex HMG-7900 game manuals (at 600dpi) of my collection. In the lot, i have 6 manuals in English and x3 in French. 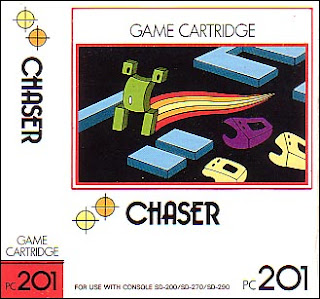 There is not much information regarding the Hanimex HMG-7900 or it's clones and even less scans for the game manuals so it was about time that i finally scans those. Also, i also uploaded other scans (not by me) that i have found on the net over the past 20 years.

Some are English version or French version of the ones i've scanned and there is a few in Hungarian. Plus, there is also pictures of French cartridge labels (small pics).

I don't know if some of you remember playing Pac-Man in the arcades in 1980-1 ? Well, after 40 years...maybe some of you have forgotten or were too young or even not born (for those who were not born before 1981, you missed the greatest arcade generation!)

Well i did play Pac-mAn back then but the very first Pac-Man arcade i've played was called "Puckman" (yup...PUCKman, not Pac-Man). Here's a picture of the cabinet: 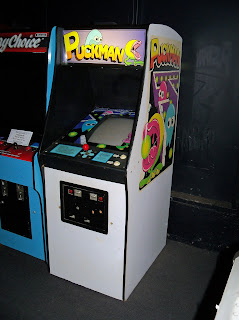 Now that's the one i've played and remember!

Long story short, these cabinets...errr...rather the marquee in particular, was sometimes the object of vandals as they removed a part of the letter "P" to make an "F" and that story is as old as this cab. And because of this, these cabinets were removed in the following months.

But thing is, this particular cabinet has a unique artwork which was made by the company Willis Industries Inc., as many still put this as a "bootleg" (in fact, it is a bootleg as the artwork was not endorsed by Namco). But the artwork, who made it ?

Now that's a great question! Usually since "bootleg" artworks were not endorsed by major companies, Willis Industries never published who were the authors just in case of a lawsuit, but the artwork on this cabinet was signed by the artist, check this out: 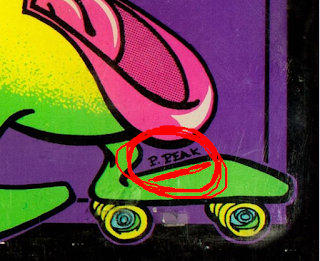 P.PEAK ! Errr....to many of you, that doesn't ring a bell but to some (at least old as me or older) who played and collects Exidy arcades like Death Race, Alley Rally and Score (plus Spiders from Mars) were done by the same man: Pat "Sleepy" Peak.

There is almost no information regarding this author but he was well known for the artwork he made for Exidy and he did some great artwork, especially for the 70's as many arcades back then had simple artwork. But let's go back to the main subject: In search of Puckman.

I'm not looking for an original cabinet as these are very, very limited now since some people gotten the idea of scrapping the artwork and repaint the cabinet yellow and putting the all well known Pac-Man artwork that everybody knows. That's a real shame as i find this Puckman artwork "unique" (as all Pat's artwork), but rather i'm looking for anyone who has one with the proper sidearts, marquee and bezel (not the CPO as it's very easy to replicate). 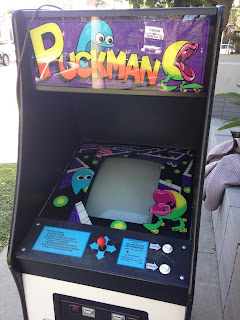 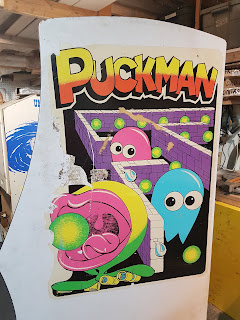 ...and the sideart.
So if anyone has this cabinet and the original artworks (marquee, bezel & sidearts), could you PPPlease take (center front) high definition pictures, pretty please ??!!!!! Because i want them to be preserved for historical purpose and i have a project in mind in the future.
So now, just need to wait and see if my call will be answered one day (hopefully before i die).
--- Sly "Waka, waka...peeououou...plok!" DC ---

The Gakken Compact Vision TV-Boy is now emulated (at last 6 months ago) and thanks to tanamの日記.

He finally made an emulator called the "yaTVBOY" which seems to run all 6 games pretty good but the problem is finding the roms. He made the emulator available with a binary fine called "hello.bin", which is a small demo of "Hello World!" (heck, the first homebrew for the Gakken TV-Boy!) so at least you can try the emulator until the roms will be available. ;)

And if you are curious, you can follow his work for the Gakken TV-Boy emulator and many others projects he working on on his blog: https://tms9918.hatenablog.com/

And if you want to see a screenshot of each games, go HERE

Hopefully that a member of the MAME/MESS team will communicate with him add add the source code in a future version of MAME. :)

While checking the net (webpages, videos, blogs, etc...) sometime i stumble on Chip-8 games that i can't find to download anywhere. So when i was looking on Youtube, i have found this video:

Chip 8 Old Tech in a New Light
The professor's name is Wil Lindsay and he teaches many type of programming (old computer, OS, 3D, etc) and last year he gave a course of RCA Cosmac Chip-8 to his students. He made a presentation for the Vintage Computer Festival East 2020 which was a "virtual" event (damn pandemic) which was held on October 10th and 11th, 2020.
His students made some Chip-8 games which are: 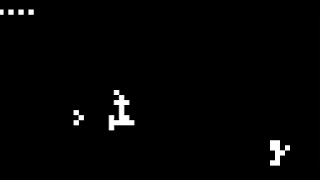 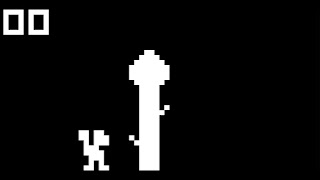 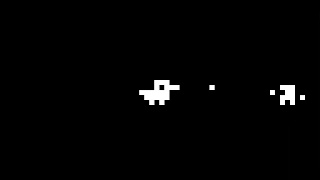 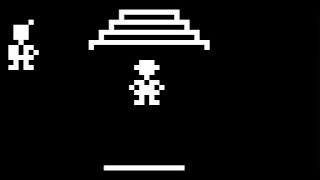 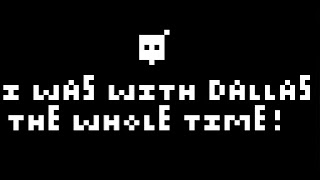 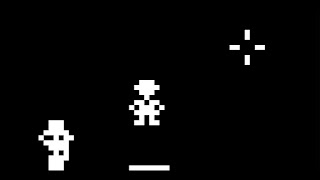 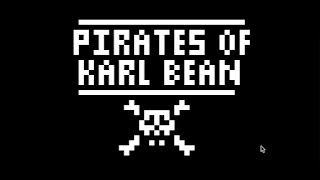 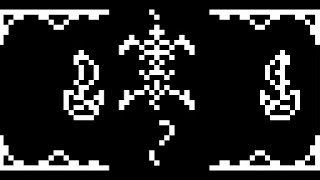 Pirates of Karl Bean (by Ray Osterman)
Sorry if i made mistakes in the authors names, hoping that one of them or Wil Lindsay will see this post and correct me.
This is five Chip-8 games that unfortunately we can't test/play them but maybe one day, these and surely others, will be available to enjoy (keeping my fingers crossed). ;)
Until next, take care!
- Sly -
at January 27, 2021 No comments:

New update for the Chip-8 Database

Been quite a few weeks since the last post but today i have updated the Chip-8 Database with 35 new entries! All the entries from the Octojam 7 ( https://itch.io/jam/octojam-7 ) and a few more discovered on the net.

Here's what has been added:

And with mostly with their manual on how to play each of them.

So check out the "Chip-8 Database" and download the updated check list and the update ZIP file.

I recently had a request from "lucius2018" (in Greece) who asked me how to mod a Bandai TV-Jack 1500 with Audio & Video output (A/V) as i am selling one and couldn't adjust the image on either channel 95 or 96. So what i did to take good pictures of some games, i just temporarily plugged alligator clips on the TV-Jack 1500 board.

First open up the console  by removing the 6 screws in the back, then locate on the board the inscription "8615". 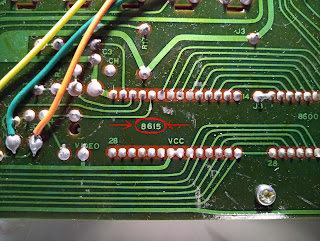 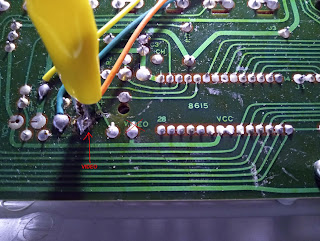 Then, go the the left and connect/solder a wire with the "ORANGE" wire - That's the VIDEO OUTPUT and not the one with the inscription on the board (i put an X on it). Now with my TV, the image and contrast are OK but on another monitor/TV, it may be darker so you will need a small amp circuit. 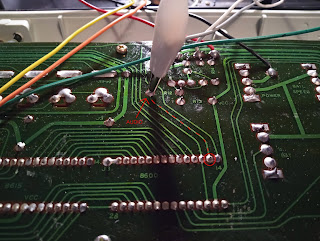 Now for the AUDIO, connect/solder a wire where the white alligator clip is, that's the AUDIO OUTPUT as it outputs from the AY-3-8600-1 pin #13. Don't try to connect from the speaker as the sound may be weaker or louder. Oh and don't forget to cut/desolder both white wires (near the edge of the board) because you are gonna hear the sounds is stereo (console and TV). ;P 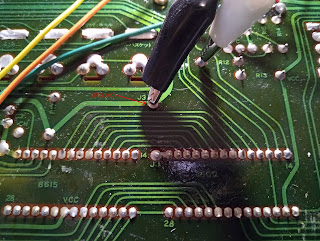 As for the GROUND, the easiest place to connect/solder the GROUND is on the solder "J3" (aka the VSS). You will need that if you want the Audio & Video to work. 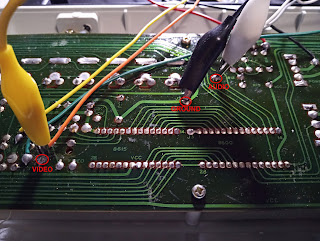 Now here is all three connections in one picture (Video, Audio and Ground). And if went well, then you'll get this on your TV or monitor (IF you don't need a video amp circuit): 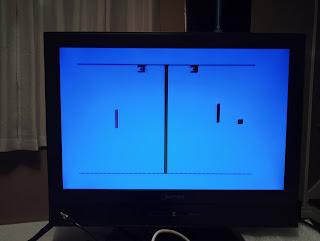 Ahh! No more snow, RF lines, distortions, etc. So much nicer than the $%$&?% RF connector!

That's it folks, now have fun playing your TV-Jack 1500 with A/V output! 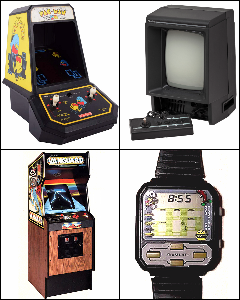